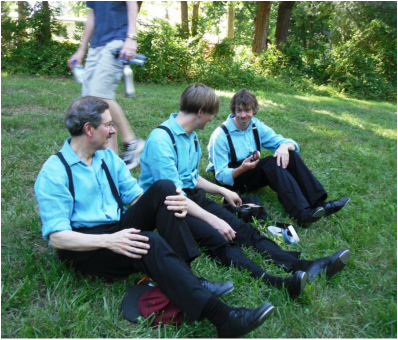 Back In Time by Ruth Pershing

Clogging is an expressive style of American dance with origins in the folk dances of the British Isles, Africa, and pre-Columbian America. Settlers in the American South took elements of these styles to form a unique American dance style, Appalachian clog dancing. By the 1930s, professional dance teams had combined traditional dance steps with more contemporary figures, creating colorful and energetic routines for the stage.

Clogging is thought of by many as an age-old dance form steeped in the rich culture of isolated mountain hollers, maintained alongside ballads, folk tales, and fiddle tunes. In actuality, it is not the least bit static and has quite a complex and multi-faceted history. Its story is only partly known, with many questions that are as yet unanswered and many that will likely remain obscure forever.

The percussive footwork that is now an integral part of team clogging began as a solo form, and is known by many names: "buck dance," "buck and wing," "flatfooting," "jigging," "hoedowning," "surefooting," or just plain "dancing." The name used depends largely on the place of use: for example, "hoedowning" is a term used in eastern Kentucky, while "jigging" is the name used in Missouri. "Flatfooting" is most common in northwest North Carolina and southern Virginia, while "buck dancing" is the label most used in southwestern North Carolina and also by African-Americans in the Piedmont. In some areas, flatfooting is the style done with feet low to the ground while buck dancing is a little higher stepping with weight on the balls of the feet. In other regions, buck dancing is the style with low steps while tap raises them up a bit more. In still others, once the feet come up off the ground very far, the dancer is simply clogging. 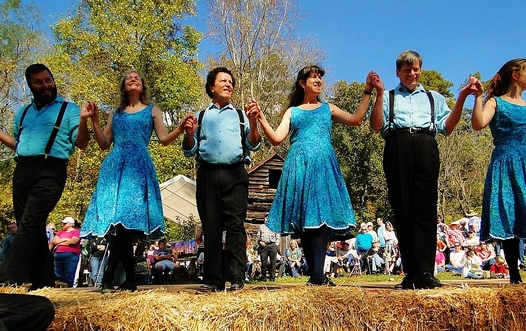 Various terms also apply to steps within each style. Steps have come to be known by the sound or motion they make, such as the 'shuffle' and 'chug;' by the complexity of the patterns, including 'single step' and 'double toe;' by animal associations, including 'wring the chicken's neck,' 'broken wing,' and 'rabbit dance;' by motions that they imitate, such as 'barnyard slide' and 'shoveling coal;' by people who invented them, such as 'Bertha' and 'Eddie;' and by places with which they are associated, such as the 'Tennessee walking step.' Steps are continually being invented and rediscovered, remembered and misremembered.

It is generally accepted that the roots of southern step dance are largely Scotch-Irish, English and African, corresponding with the major immigrant ethnic groups that populated the area from the 1700s on. Although many of the first team cloggers from western North Carolina had Cherokee heritage, the influence of traditional Native American dance is debatable. There are probably minor elements of clogging from German, Irish, French, and northern and eastern European groups. The Scotch-Irish, English, Irish, and French provided the sources for the quadrilles and other figure dances which became the cotillions, squares, running sets, and big sets done at community dances and used later by traditional clogging teams. The elements of both figure and step dance vary in their degree of influence from place to place, depending on the existence of local pockets of ethnic groups, the importance of plantation life and its legacy, the degree of isolation of remote locations, travel of talented individual dancers, religious practices and pressures, and other social variables. 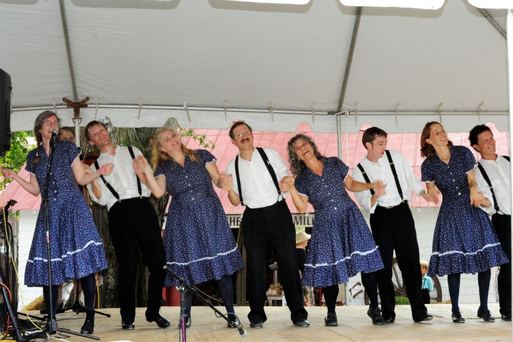 By the mid-1800s, step dance was to be found in the mountains and lowlands, in the north and south, and in both urban and rural areas. It evolved alongside old-time music, crossing over frequently between black and white communities, urban and rural settings, and moving easily from the stage to the dance hall to the home and back again. Traveling minstrel shows, then later vaudeville and medicine shows, were common avenues for the transmission of new steps into even the most isolated areas. Steps were known to have crossed back to Europe, then returned, changed again. In rural areas, children learned to dance at house parties, corn shuckings, wood cuttings, barn raisings, quilting bees, and numerous other cooperative community workings and celebrations. In the southern highlands in the late 1800s and early 1900s, dance and music styles evolved in somewhat greater isolation from the mainstream. In urban areas, the dance flourished at street corner gatherings, places of work such as tobacco warehouses, and night spots, allowing greater infusion of newer styles such as the Charleston. By the 1920s, the dancing had developed to the point that clog dance routines such as "Captain Jinks" and "Rastus" were taught in physical education programs in some urban public schools, though it was no longer a part of mainstream culture. This interweaving of multiple sources and paths provided the roots of both clogging and tap dance.

Team clogging is a relatively new composite dance form that began in the 1920s in western North Carolina. In was initiated when The Smokey Mountain Dancers first performed at the Bascom Lamar Lunsford Festival in 1927 in Asheville. By 1938, team clogging had its own competition at the Lunsford Festival, and it was won by the well known Soco Gap Dancers from the Maggie Valley area. They performed freestyle buck dance steps continuously while doing mountain style square dance figures called by one of the dancers. Team clogging won more widespread respect and recognition when the Soco Gap Team performed at the White House in 1939 for an audience including the Queen of England. Queen Elizabeth was said to have remarked "that's just like our clogging," and although some say the name clogging dates from that episode, the term "clog" was in use much earlier than that time. Taps and fancier costumes became popular in the 1940s as clogging became more of a show form. By the late 1950s, especially through the influence of the Blue Ridge Mountain Dancers, teams began to create preset step patterns for all the dancers to do at the same time, and "precision clogging" got its start.

The music which inspires buck dancing and clogging has included any kind of rhythmic music, from the oldest solo fiddle tunes of early America to the fiddle-banjo duets of the 19th century to old-time string band music of the 20s to the bluegrass of the 40s and today. More unusual instruments such as jaw harp, quills, bones and bottle-blowing have been its accompaniment, and when instrumental music has not been available, handslapping (also known as hambone or patting juba) has provided the beat. Traditionally, live music has been used, but many modern cloggers rely on recorded music with a popular country-western flavor. Step dance of the British Isles and Canada uses jigs, hornpipes, waltzes and reels, but American clogging is done only to hoedown tunes in reel (2/4 or 4/4) time.

Beginning in the 1970s, clogging experienced a resurgence of interest. The Green Grass Cloggers, using square formations and newly discovered steps from old-time dancers, were organized then, as were many freestyle and precision groups who danced in the western NC style. The world of clogging still includes individuals who buckdance and flatfoot for themselves at community gatherings, square dances, and festivals. Cloggers today have been able to benefit from widely available conventions, competitions, workshops, and instructional tapes, though these have had a homogenizing influence over regional dance styles. Throughout its history, American step dance has been infused with elements from many traditions, and that process continues today. Country western line dancing, disco, break-dancing, and hip-hop elements mix with bits and pieces from jazz tap, Irish and Canadian step dance, and blend further with steps and styles newly found in small Southern communities, both black and white. This dance form is changing yet remaining rooted, and that is its most enduring quality, ensuring the participation of young and old alike.

Much of the information in these notes is drawn from three principal sources (as well as numerous minor sources and the author's own experience dancing, traveling and collecting). The three main sources are: